FROM BALI BOMBING TO SUKHOI TRAGEDY, THE SUCCESS STORY OF INDONESIAN DVI IN UNCOVERING VARIOUS CASES

FROM BALI BOMBING TO SUKHOI TRAGEDY, THE SUCCESS STORY OF INDONESIAN DVI IN UNCOVERING VARIOUS CASES

The publication of this book had gone through a long process, starting from my passion as a writer who has a study background in disaster victims’ identification and involvements in the activities of DVI (Disaster Victim Identification), and then encouragements from many people to write about the DVI’s works and success in uncovering many cases. The aim, of course, is to make it as a subject of learning for the general public about the meaning and benefit of the works of identifying victims of natural disasters and man-caused disasters.

The Indonesian version of this book had been published in mid-2013. It was profoundly welcomed by the general public, the Police, mass media, and academicians, especially those who involve in medicine and forensics. In less than two months, the book had to be printed in second edition.

Therefore, as a writer I would like to take this opportunity to extend my gratitude and respect to all sides who had supported the publication of the Indonesian version book. I would like also to extend my gratitude to all officials at that time, including General Police Drs. Timur Pradopo as Chief of Indonesian National Police, Irjen Polisi Drs. Didiek S. Triwidodo M.M, M. Hum as Central Java Police Commander, Brigjen. Pol. Dr. Arthur Tampi as Kapusdokkes Polri and the committee chairman of DVI Nasional Indonesia, Kombes Pol Dr. Musyafak as chairman of Biddokkes at Central Java Regional Police (Biddokkes Polda Jateng), and to Brigjen Pol. dr. Edy Saparwoko, M.M., DFM, Sp.JP., Irjen Pol dr. Musaddeq Ishaq, DFM, as well as many other officers in the Indonesian Police that I could not name them one by one.

I would like also to extend my gratitude to Mr. Andy F. Noya as a prominent figure of the Indonesian reading society who provided his own testimony in the book, and my colleagues Kombes Pol dr. Anton Castilani, DFM, and drg. Sindhy R. Malingkas. I would like also to thank my family, my husband, children, parents, publisher, and all people who have contributed to this publication that I could not mention one by one.

This English version was published to meet the demands of many sides concerned, including from the foreign police institutions that consider it as a source of learning from In donesia about the identification of victims in natural disasters and man-caused disasters. The more so, a number of cases mentioned in this book involved foreigners. On one side, the issues of foreigners have encouraged all professionals to study it, but on the other side, all families’ members of the foreign victims with various aspects of their background study will also be encouraged to read and study it.

In writing this book, I will not only fulfill a moral responsibility resulted from my involvement in DVI Indonesia. But more than that, this book will also show the professionalism of the Police and the team of DVI Indonesia, and that way their works and performances can be well known at the international stage.

This English version publication was also a result of encouragement from the current Chief of Indonesian National Police, General Police Drs. Sutarman. According to him, the advancement of information and communication technology has made the world without borders. All events in other countries, especially related to natural disasters and man-caused disasters, cannot be concealed from the attention of people in other countries. The Police as the vanguard in handling and uncovering the victims is required to be professional and open to the international community. That is the reason why the Chief of Indonesian National Police has strongly encouraged the publication of this English version, and was willing to write a preface. As a writer of this book, I would like to extend my gratitude and respect to the Chief of Indonesian National Police.

Finally, as the Indonesian proverb says “Tak Ada Gading yang Tak Retak” (There is no Ivory that is not Cracked or Nothing is Perfect), allow me to take this opportunity to apologize for any mistake or shortcoming in publication of this book. We welcome any criticism and ideas to make this publication better. 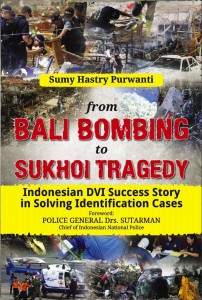